A knight’s ride through the kingdom of  fashion 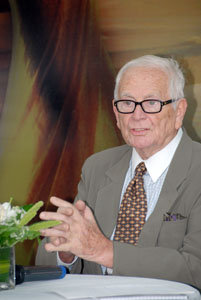 What form would a knight in the fashion world take? Perhaps the best example would be a person that has dedicated his life to artistic creation and personal excellence.  Despite reaching his 85th year he is actively creating his next fashion show to be held in the sand dunes along the Silk Road; as well as preparing to venture into terrain as yet unknown to himself – the shooting of the first Chinese film on the fashion world, for Chinese Central Television (CCTV) where his brand will form the film’s backdrop and finally launching a project to present the Opera “Marco Polo” around China.  This figure is none other than the most recognised French man inChina – Pierre Cardin.

At the summit of the fashion world, this great couturier has already seen many of his successes recorded in the fashion history books.  He has received the highest accolade from the French haute couture milieu in the form of the “Dé d’Or” on three occasions; his series entitled “Cosmocorps”, particularly representative of his style, is an intrinsic part of fashion influences in the 60s. Pierre Cardin is not only respected for his work as an exceptional couturier but also because he has expended so much energy on promoting fashion across the world. Pierre Cardin arrived inChinalong before the Chinese had the slightest idea what fashion was about and at a time when it was impossible to predict the changes the country would undergo. Thanks to many years of perseverance, his brand has become the most recognised haute couture brand inChina.  Throughout this time, Pierre Cardin has fostered a deep and long lasting friendship with the Chinese people. For all these reasons, each of Pierre Cardin’s initiatives in this country will continue to enthral.

The fashion genius notches up three decades in China

It is 30 years since the Chinese were first presented with Pierre Cardin’s brand at his fashion show in 1981, and therefore it is 30 years since the Chinese were introduced to luxury brands from around the world.  Every year, for the two season’s collections, Pierre Cardin has consistently brought over the latest fashion trends fromParis, fashion capital of the world.  Not only that, every collection has been the opportunity to create a great event around fashion whether hosted in an ancient ancestral temple, the capital’s most modern shopping centre – the Place – or amongst the magnificent remains of the Ming dynasty’s capital city.

This time, more than 30 years since he so successfully imported haute couture into this country, Pierre Cardin will use the Silk Road as the backdrop to his spring/summer 2008 collection, in the magnificent dunes ofWhistlingSandMountainat Dunhuang.  The designer’s spectacular creation alludes to Marco Polo, emissary who travelled theSilk Roadover 700 years ago and the same route that European travellers today feel compelled to follow. The show unfolds without pomp and ceremony.  The models appear from behind a dune, emerging one by one into view like a gracious snake slithering across the dunes, along a 280 metre long “silky trail”.  As the sun settles in the west, the purple sky forms a magnificent backdrop… a mirage rises before the eyes, a desert caravan appearing fleetingly on history’s great path before carrying on its travels. 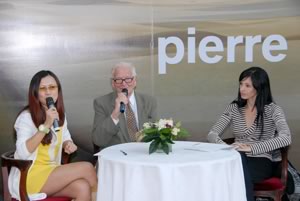 At the age of 85, you would expect a well known fashion designer to sit back on his laurels, why venture into new terrain? But Pierre Cardin has not been able to resist the challenge and to everyone’s pleasure has launched into a new domain.

Invited to collaborate with China Central Television (CCCTV) on the filming of the first Chinese film on fashion, Pierre Cardin has given the project his full support.  With his brand as the film’s backdrop, the story goes behind the scenes to reveal the real world of fashion to the public. The young French actor, Philippe de Groussouvre was chosen to play the role of Pierre Cardin in his youth and the popular Chinese models Chun Xiao, Er Jingyang and Chen Chun play the principal roles.  In this gripping tale set in the fashion milieu, all the key players are revealed: stylists, models, make up artists, hair dressers, production agents…

Another of Pierre Cardin’s successes will doubtless be the opera “Marco Polo” set to tourChinain October 2008 after the Olympic Games inBeijing.  The storyline, choreography and production of this “Spiritual Voyage” will be undertaken by the two great choreographers Marie-Claude Pietragalla and Julien Derouault. Marco Polo is an epic composition on the themes of nature and destiny.  This magnificent presentation will bring together in one body: dance, music and movement, fusing all forms (classical, modern, acrobatics and marital arts). It springs from the ultimate artistic inspiration and will appear before the eyes of the audience as a sentimental journey, a spiritual voyage.

The image of Pierre Cardin as the most remarkable grand couturier is irrefutable, but his virtuosity extends to other areas.  His design talents have been applied to furniture, planes and yachts and most notably his bubble architecture in the French Côte d’Azure, all this body of work contributing to his status as a fashion designer.

Pierre Cardin has always loved the arts and has long been a patron.  In 1970 he opened the Cardin Cultural Centre just a short walk from theÉlyséePalace, to create a platform to help launch young promising artists.  To date such artists as the great Russian ballerina Maya Plisetskaya, the Canadian singer Céline  Dion, the Vietnamese painter Daniel Jègoû or even the Chinese painter Deng Lin have all benefited from Pierre Cardin’s support. This winter, a season of Chinese culture will be presented through paintings. Pierre Cardin has raised funds through auction to restore the Great Wall inChinaand to preserveVenicefrom rising waters; he has just recently created an international federation to oversee the restoration of theAlexandrialighthouse inEgypt. In short, although Pierre Cardin expends a huge amount of energy on his philanthropic work, he finds it enormously rewarding. 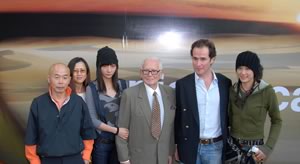 It is also under the Pierre Cardin name that the French luxury restaurant “Maxim’s de Paris” has spread across the globe – this century old gastronomic French restaurant, cited as the most famous French restaurant by the AFP. After having assured his reputation in fine dining, Pierre Cardin extended this symbol of Parisian high society to a large range of consumer products such as quality foodstuffs, cigarettes, hotels, yachts, in short all that Pierre Cardin would himself quality as “the art of living”.  It must be said that Pierre Cardin promotes a concept of fashion as an aspiration towards a life full of luxuries.

His audacity and proven track record have earned Pierre Cardin the status of the most courageous and entrepreneurial designer of the fashion world.  He could be likened to one ofFrance’s knights, full of ardour, wisdom and courage. Nothing bars his way and he gallops freely across the plains.  What will be his next conquest? Let us sit back and wait, calmly!