A modern interpretation of one of the century’s legends

In China, Pierre Cardin has raised fashion to a celestial status. Once again he has stunned us all with his inventive artistic flair.  On October 17th 2007, in the New Poly Plaza theatre in Beijing, a press conference took place to launch three events: the musical ballet “Marco Polo” financed and produced by Pierre Cardin; the first Chinese film focussed on the fashion industry “WhistlingSand Mountain” and the launch of the Pierre Cardin 2008 Spring/summer collection. Personalities from the art world as well the world’s media attended in anticipation of another of Pierre Cardin’s magnificent unveilings.

This new masterpiece from Pierre Cardin – the musical ballet “Marco Polo” - written in modern language and with all the noble art forms on stage, relates the explorer’s incredible voyages and experiences..

Not only is Pierre Cardin a great designer of international renown, an inspired artist, and a tireless entrepreneur with a global fashion empire; he is also a remarkable diplomat whose work has largely contributed to harmony and mutual understanding between different ethnic groups. Since 1957 he has moved forwards with enthusiasm, always maximising his position as a forerunner. He was the first to travel regularly between Paris and Tokyo; he was the first to launch a prêt-à-porter line…

His attachment to China stretches for more than 30 years now. His use of the arts as a communication medium has meant that he has been able to maintain China’s ongoing fascination with the Pierre Cardin brand. 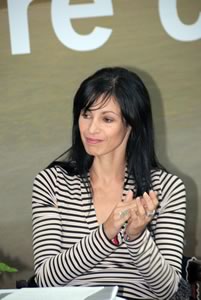 Pierre Cardin continually made it known to the Chinese authorities that he wished to see France represented through an original showpiece during the hosting of the 2008 Olympic Games.

To this end, Pierre Cardin invited Marie-Claude Pietragalla and Julien Derouault to work together on an opera: the imaginary voyage of Marco Polo. The world premier is already set to take place from August 8 to 24th at the newly built National Theatre in Beijing, during the cultural celebrations of the Olympic Games.  The Poly group will oversee the organisation of 30 presentations of the show throughout China.

The idea behind this work is to fuse all forms of artistic movement (classical, modern, acrobatic, martial arts….) as all these art forms have irrevocably contributed to the making of our era.

This magnificent presentation will bring together in one body: dance, music and animation. It springs from the ultimate artistic inspiration and will appear before the eyes of the audience as a sentimental journey, a spiritual voyage.

Marco Polo is a work laced with enchantment and fantasy that will open up two paths: one towards the Silk Road and the other towards the discovery of self.